​
It is interesting to note that science is catching up!!
The HeartMath Institute's research library  includes many studies on all subjects energetic. And the The Global Coherence Initiative is actually monitoring the earth’s magnetic fields  (http://glcoherence.org/monitoring-system/about-system.html)

to study not only external effects on the earth such as solar flares/storms and the lunar cycles, but how human emotion affects the earth’s field.

A very important function of the Emissary Wheel geometry (as related in the James Twyman book EMISSARIES OF LIGHT) is that energetically it magnifies and intensifies energy, much as light going into a crystal can be concentrated into a piercing ray. And why is that relevant to healing the world?

As we gradually give over our personal energy blockages through our healing practices of improving our physical health, becoming more self aware, and forgiving or letting go of all that is not peaceful in our hearts, our personal energy becomes purer and more powerful.  Energy follows intention, so when you sit in circle and direct your personal energy to the center, it merges with the energy from other's doing the same thing.  You may have participated in a prayer circle and personally felt the healing that can take place in the center. Or witnessed someone being healed that may not even be present by sending the energy in the circle to wherever that person is! Gregg Braden has written (in his book THE ISAIAH EFFECT) about the 'fifth mode of prayer' being the very energy that we have been talking about. He describes how it moves with intention and can create powerful positive differences wherever it is sent.

James Twyman teaches that by directing energy into the center of the Emissary Wheel (or any circle for that matter), and holding the intention that it be for the highest good of whoever it is being sent to, that the recipient of that energy will be more equipped to make positive choices and take action accordingly. James and Salle Redfield (CELESTINE PROPHECY) hold bimonthly teleconference calls to do exactly that with people participating from all around the world. Imagine what our country would be like if more people sent this kind of energy to the government leaders instead of the energy of mistrust and hatred.

Einstein knew that you could not solve a problem within the same consciousness it was created.  If peace were to come from people angrily marching in the streets, we would have had it 50 years ago.  In the words of Wm. Blake on this beautiful painting, "And we are put on earth a little space, that we may learn to bear the beams of love." We can make a difference - we are the ones we have been waiting for... 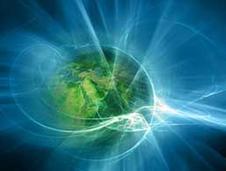 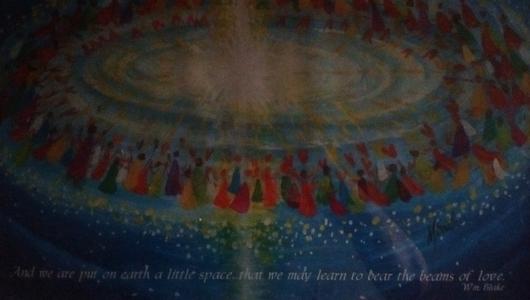